On Saturday, eleven Youth Advisors supported the Museum’s annual International Slavery Remembrance Day commemorations. We supported workshops, including an object handling session ran by artist Jean Campbell, and we also got to go to lots of activities, including a lecture about Africans in Tudor Britain by Onyeka, a gallery tour of The Atlantic: Slavery, Trade, Empire led by Formal Learning Officer Lucie Trottman and a tour of Traders led by historian S.I. Martin. After the Songs of Freedom singing workshop, led by Ethnovox, we attended the Closing Ceremony by the Thames.

‘We did a tour of the Atlantic Gallery with Lucie. It was really awesome. It was very audience involved’, Isobel

‘I learnt that there was a really big manila that was worth someone’s life, so you could buy someone with that one piece of jewellery’, Shezara

Youth Advisors by the River

END_OF_DOCUMENT_TOKEN_TO_BE_REPLACED

Today the Youth Advisors did a workshop with Jean Campbell, learning about cultural continuity and the Transatlantic Slave Trade. The day started with a group game to share our name origin with each other. we learnt that enslaved people would often have their names changed and these cultural indicators, carefully chosen by our families, were lost 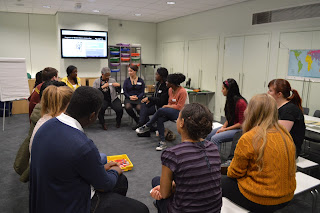